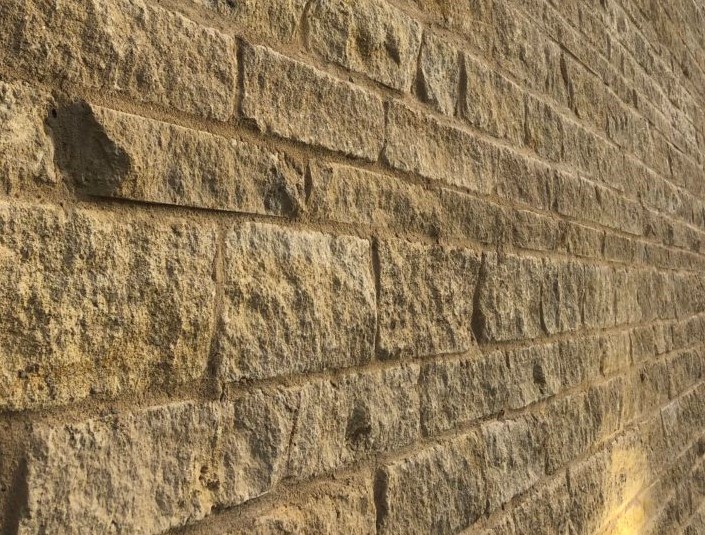 Natural walling stone is the stone extracted from the earth in its natural form. It has a natural colour which can be variable creating interest and also blends harmoniously with its native surroundings. It can have shell inclusions sometimes forming interesting patterns.

Natural stone can be hand fashioned and typically takes a slightly wavy appearance or it can be reduced from large blocks in a slab form and cropped into bricks or other architectural products.

The advantages of natural stone is one of the highest quality, its beauty being synonymous with the ancient castles, cathedrals, churches and fine historical buildings.

The colouration will remain the same throughout its life other than from the effects of surface growth, lichens etc.

Artificial stone dates back thousands of years, it was used in Chinese ship building and by the Ancient Egyptians, it was common during the 19th Century in London and across Europe.

The two principle methods of casting are the wet mix and the semi dry mix.

The wet mix is agitated by a vibrating rod or table in order to drive  out air pockets. Setting is slow as the mix has to remain in the mould for a long period.

The dry mix is rammed tight with air or electric hammers. The finished effect is superior to the wet mix in terms of appearance. The product can be removed from its form or mould more quickly.

Other terms for artificial stone are reconstituted or reconstructed stone.

In reality the wet mix version which is commonly used for walling bricks is concrete with a colour pigment added along with a water proofing solution.

Artificial stone is cheaper than natural stone. It is relatively uniform in colouration, pattenations, texture and sheen which acts as a giveaway to its cast origin.

The colour pigments can fade over time due to sun light creating a greying concrete appearance. The product is smooth faced from the mould.

Due to the ability to add water retaining chemicals the artificial stones are extremely weather resistant in all applications unlike the oolitic limestones which require building with care and builder integrity.

The semi-dry artificial stone produces a superior realistic finish, however it is slow and expensive to produce and produces a bland stone compared to some of the natural stones.

In terms of carbon cost, the natural stone is approximately 25% of the Co2 used to produce artificial stones. This is entirely due to the cement contents in the latter.